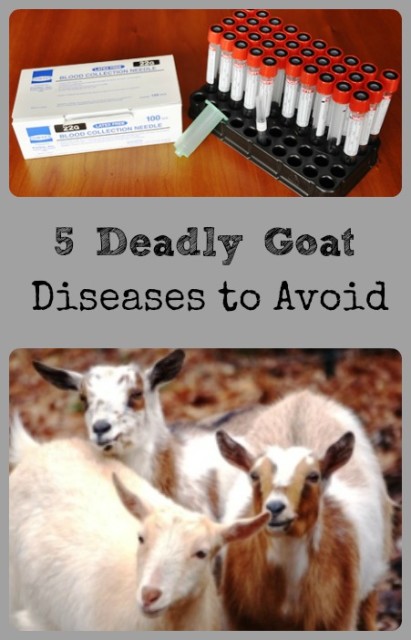 There are several very serious (fatal) diseases that can infect goats, and that can be transmitted through an entire herd by bringing in just one infected goat. That’s why it’s very important to buy goats from reputable sources that can demonstrate that they have disease free herds.

We try to maintain a “closed herd” as much as possible, but occasionally need to bring in a new goat. Before bringing any goat to Bramblestone Farm, we insist that the breeders provide evidence of a disease free herd, and each adult goat is tested to ensure that they are negative for CAE, CL, TB, Brucellosis, and Johne’s. For very young goats that would likely test negative for any disease anyway (too young to test positive), we insure that the dam and sire have been tested and are negative before we bring the kid to the farm. We also regularly test the entire Bramblestone herd to ensure they are disease free, and the latest results (4/4/14)  were all negative again! The diseases we’re concerned about and why are briefly described below:

CAE (Caprine Arthritis Encephalitis) – CAEV is a lentivirus, from the same family as the human HIV virus, and there are forms of the disease that affect both goats and sheep (together they are referred to as small ruminant lentiviruses (SLRV)). It’s estimated that around 25% of the goats in the US are infected with this disease, and if it becomes active the goat will exhibit any or all of five illnesses (arthritis, encephalitis, pneumonia, mastitis, and weight loss) until death. Some goats that contract the disease never show signs of illness, but are carriers of the disease for life.

CAEV is carried in the white blood cells, so it’s transmitted by body fluids. It’s spread from dams to kids through colostrum and milk, and by contact between positive and negative goats, milk in milking equipment, and clippers. Contact with sheep can also be a source for the disease. Most goats contract the disease when they are quite young, and develop the disease months or years later. In young goats, testing for the disease is not generally reliable until 4 – 6 months of age. Blood testing is the most common method used for detecting CAEV, and a true positive mean the goat is infected with CAEV. No cure has been developed for CAEV.

CL (Caseous Lymphadenitis) – this chronic disease also has no known cure and causes internal and external abscesses to form in the lymph nodes, and leads to wasting, coughing, mastitis, respiratory, and neurological problems. The disease is highly contagious, and enters the goat through wounds or mucous membranes. It can take two to six months for an abscess to appear, and the disease is spread when the abscess bursts and another goat contacts the bacteria. Once CL gets into the soil, it’s extremely difficult to eradicate because it can survive for long periods of time and spread via fencing, forage, clippers, straw, and hay.

Because CL is so contagious, a positive goat can spread the disease from internal abscesses (even though there are no externally open abscesses), and it can pass to humans (although this has rarely been documented); it’s often recommended that any CL positive animal be culled. There is a blood test for CL, and there are also two vaccines for CL. The vaccine will do nothing for a goat that already has the disease; also, once vaccinated against CL, because the vaccine contains the bacterium, the goat will test positive for CL.

Johne’s – this is another fatal disease that affects the intestinal tract (it’s pronounced “yo-nees”). It has a long incubation period and can be hard to detect – the only symptom may be weight loss while still eating well. The disease is spread through body fluids, and also can be transmitted from cattle (many dairy cow herds are known to be infected). Goat kids can get Johne’s from drinking cow colostrum or milk, and even pasteurizing it does not guarantee that it won’t be transmitted through the milk. Johne’s can be detected by blood test, but there’s no known treatment for the disease.

Certified Free – we used to also test the entire herd for Brucellosis and Tuberculosis, but Ohio is a “certified free” state for those diseases so we no longer test our herd for these diseases. Any goat coming from a state that’s not certified disease free for these two are still tested for them. The links to the Federal Register identifying which states are certified free are included below. Be sure to verify that the information below is up-to-date when checking on Brucellosis and Tuberculosis testing.

TB (tuberculosis) – this disease is also rarely seen today in goats (goats are said to be highly resistant); however, because this disease can also be transmitted to humans through raw milk consumption, it’s important to verify that the herd is negative particularly if the goat milk is being consumed raw.

Testing new goats and the herd each year can be expensive; however, we’re much more comfortable knowing that our goats are disease free, the kids we’re sending off are too, and the milk is safe.

The contents of this site are the property of Better Hens and Gardens. All content contained herein is copyrighted. We love it when you share, but if you do, please link back to the original post. Material included here is not intended to be, nor does it constitute, the giving of medical advice. This blogs content is for informational purposes only and Better Hens and Gardens or others associated with this site shall not be held liable for any damages incurred through the use of information provided in this blog. Better Hens and Gardens accepts products for review and other forms of paid advertising; however, although compensation received may influence the content or topics covered in this blog, it will never influence our opinion of any product. The views and opinions expressed in this blog are purely those of Better Hens and Gardens. Any product claim or other representation about a product or service should be verified by the manufacturer. Better Hens and Gardens is a participant in the Amazon Services LLC Associates Program, an affiliate advertising program designed to provide a means for us to earn fees by linking to Amazon.com and affiliated sites.
PRIVACY POLICY
5.7K shares