I’m reposting this guide to choosing goat herdsires because it’s that time of year when many goat owners are choosing which bucks to use for breeding, and I see many bucks for sale or for rent. But, it’s very important not to use just any buck; and to select bucks that will improve your herd and the breed in general.

Most people looking to purchase goats are looking for either milk production or show quality (or both), so producing kids with better dairy conformation and milk capacity only makes good sense. And, most owners retain some of their kids, so it’s likely you’ll benefit from making good choices for years to come. 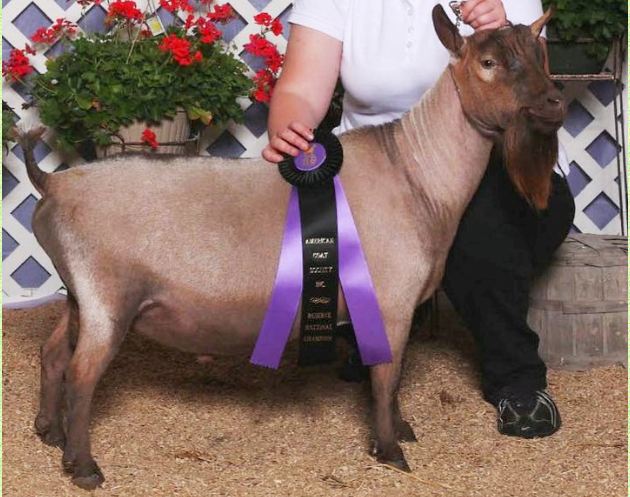 It’s also important to choose carefully to try to improve the breed in general. Today, Nigerian Dwarf dairy goats have better milk production and longevity than the original animals admitted into the registry (the breed is relatively young with the first registry opening in 1981), whereas Nubian milk production has declined because too many poor genes were passed along. And, guess what, the popularity of Nigerian Dwarf goats is increasing rapidly (more demand = better sales) – while Nubians not so much.

So, what are some of the methods for choosing bucks that will improve our herds?

The first step is determining what the weak areas are in each doe (or the herd) that we want to improve. Is it milk production, udder appearance, levelness of the topline, legs – what is it we most want to improve in each doe? We’re looking for a buck that will improve those characteristics.

For example purposes, we’re going to look at picking a buck to improve the udder on a doe (Tinker Bell from Bramblestone Farm) that has great milk production for a first freshener but could be improved in udder conformation. In the photograph above (sorry about the shadows, it was a sunny day), we can see that Tinker Bell has a nice looking first freshening udder, but it could be higher and have better attachment. So that’s one thing I’d like to improve in her daughters.

Obviously, udder improvement isn’t something you can tell from looking at a buck; and, it’s always important to do more research than just looking. As the example buck, I’m going to consider Old Mountain Farm Palindrome (aka Dash – he’s the buck in the photo above).

If we’re serious about improving, we use a registered buck. That way we can look at his pedigree for milking and conformation information (see Understanding Goat Pedigrees). Owners should provide pedigrees or post pedigree information on their websites. I particularly like using bucks registered with the American Dairy Goat Association (ADGA) because you can also access a great deal of information about a buck online at their site.

Ideally, his dam and his grand dams would have Advanced Registry (AR) star milking designations in their names (i.e. *M and *D) and multiple star milkers (3*D indicating 3 generations of star milkers) are even better. We’d also like to see that his sire and grandsires have milking designations (i.e. +*B and +*S) showing that their progeny have earned milking awards.

For conformation; CH or MCH in his or his ancestors’ names shows that they’ve been shown and judged to be champions in dairy conformance. Even better are ancestors with a GCH or ARMCH designation, meaning that they’re permanent champions and have milk production awards.

For improving the udder in our example doe, Dash’s (see his pedigree here) grand dam is a 3*D milker but his dam doesn’t have any milking stars. Since it’s the udder and not milk production that I’m concentrating on, that’s ok with me. I can tell from his pedigree that his sire and grand dam are both permanent champions (and his grand dam was 17 times best udder) so that’s a good indication of good udder conformation.

If his dam and sire’s dam have AR milking star designations, then their DHIR (how much milk they produced for how long and what it was made up of) information can be found on-line. Of course, there are many small herds that don’t participate in DHIR testing, but that have great milk production lines. In that case, it’s important to ask the owner for their unofficial or barn milk production records (for the prospective buck’s dam, sire’s dam, or any sisters).

For our example, I’ve reviewed the milk production records and confirmed that the bucks dam and sires dam produced the minimum amount of milk acceptable to me – I know that Tinker Bell already has great milk production, so it’s not an area that I’m going to do lengthy investigation on – I just don’t want to go backwards.

If he’s a buck registered with the American Dairy Goat Association, then he may have been linearly appraised (a means of measuring the dairy conformance of any goat), and you can go to their site and find the results of the appraisal. You can also check to see whether his ancestors have been appraised (see Understanding Dairy Goat Linear Appraisal for a description of the appraisal process).

In Dash’s case, not only has he been appraised (you can see his information on-line HERE, but so have his dam, sire, and grand dam. His sire was appraised as 90 EEE (E’s mean excellent and are the top score), his dam as 91 VEEE, and grand dam as 91 EEEE – those are very good scores! And, his dam and grand dam both received E’s (excellent) in the mammary department. So, based on this information, there’s a very good chance that he could improve Tinker Bell’s udder.

It’s also important to check the appearance of the buck himself. Not only should he have great conformation in your eyes, but you also want to make sure he doesn’t have any weaknesses that are already in your herd or doe. If there’s linear appraisal data, it’s easy to quickly identify any areas of potential weakness and make sure those don’t match weaknesses of the prospective doe. In fact, you’d like the buck to be strong in any other areas of weakness that the herd or doe has.

In Dash’s case, he does have great conformation (he is the 2011 AGS National RCH buck); and I can’t identify any weaknesses similar to those Tinker Bell has. I wouldn’t mind if Tinker Bell were a little taller (she’s 20 ½”) with a straighter topline and Dash is relatively tall (but not over-height) and his topline is very level, so they appear to be a good match.

It’s also a good idea to research any offspring the buck may already have, and possibly his sisters and their offspring. It can take a bit of hunting, but surprising things can turn up.

In the Dash/Tinker Bell example, it turns out that Tinker Bell’s half-sister (Wild Wind Farm Ginger Snap from Miniature Acres Farm) has a daughter sired by Dash that is also a first freshener. Here’s a photograph of the udder improvement that pairing produced (Ginger Snap is on the left and her daughter, Ellie is on the right).

There are other methods that can be used to evaluate a buck’s potential (the subject could easily take up a chapter in a book) for improving a herd or doe; but as the picture above shows – the right buck can make dramatic changes, so it’s worth doing some homework. As far as Tinker Bell and Dash, they’re going on a date soon – everything indicates improvement is likely!

Many Thanks to Cindy from Wild Wind Farm and Mary from Miniature Acres for letting me use their photographs and goats as examples!

The contents of this site are the property of Better Hens and Gardens. All content contained herein is copyrighted. We love it when you share, but if you do, please link back to the original post. Material included here is not intended to be, nor does it constitute, the giving of medical advice. This blogs content is for informational purposes only and Better Hens and Gardens or others associated with this site shall not be held liable for any damages incurred through the use of information provided in this blog. Better Hens and Gardens accepts products for review and other forms of paid advertising; however, although compensation received may influence the content or topics covered in this blog, it will never influence our opinion of any product. The views and opinions expressed in this blog are purely those of Better Hens and Gardens. Any product claim or other representation about a product or service should be verified by the manufacturer. Better Hens and Gardens is a participant in the Amazon Services LLC Associates Program, an affiliate advertising program designed to provide a means for us to earn fees by linking to Amazon.com and affiliated sites.
PRIVACY POLICY
288 shares