Chickens love eating pumpkins, gourds, and squash. So, don’t throw your edible autumn decorations out this fall. Put them to good use as natural dewormers and treats for your birds instead!

These vegetables (technically they are fruits) can be used to combat boredom and promote flock health year-round. Their seeds are well known for their anthelmintic (deworming) properties while the flesh of many varieties are quite nutritious. In addition, chickens find eating them highly entertaining. Most varieties store well, so it’s a good idea to stock up in the fall while they’re plentiful and use them throughout the year to keep your flock healthy.

We’ve been keeping chickens for quite a few years now and have never had any issues with them having internal parasites, even though we don’t use commercial chemical wormers.

I believe one reason is that we always grow (and have a large number of volunteers) squash, pumpkin, melon, and gourds in the garden. And, we feed the extras to the chickens on a regular basis. There always seem to be more than we can consume.

Pumpkins, gourds, squash, cucumbers, cantaloupe, and watermelon are all from the Curcurbitaceae plant family (commonly known as the gourd family). Seeds from the plants of this family have been used for hundreds of years as a natural dewormer for both livestock and humans.

Many chicken keepers recommend feeding chickens pumpkin or squash seeds for a week each fall and spring to prevent internal parasite overloads. However, despite being frequently recommended for worm prevention, there are currently no studies proving the efficacy of the seeds from these plants as a dewormer in chickens. That’s because there has been no driving economic reason to fund studies proving that they work in chickens.

There has; however, been an increase in concern over parasitic worms becoming resistant to all commercially available synthetic dewormers. So some studies have recently been performed on other livestock using the seeds of the gourd family plants. The hope is that substances can be found that are natural dewormers to replace the synthetic anthelmintics that are becoming ineffective. 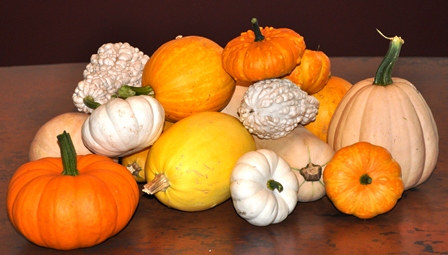 Why Deworm Chickens and How Do The Seeds Work

It’s likely that all chickens that have access to the outdoors carry parasitic worms. They just naturally pick them up as they peck and scratch in the dirt. It’s normal for healthy chickens to have some level of these worms, but the worms attach to the stomach lining or otherwise feed off of the chickens and prevent them from absorbing all the nutrients that they ingest. When worm levels become too high, it can become life-threatening.

Signs that chickens have too high of a worm load include visible worms in their droppings or eggs, weight loss, decreased egg production, increased feed consumption, and pale egg yolks. Deworming the flock periodically helps prevent worm loads from becoming too high. That’s why it’s commonly recommended that chickens be fed raw (whole or ground) pumpkin or squash seeds free choice for a week each spring and fall as a natural preventative measure.

The seeds from the Curcurbitaceae family members are coated with a substance called cucurbitacin which is believed to be responsible for their anthelmintic properties. The substance paralyzes the worms and their larvae allowing them to be flushed out of the chicken’s system.

The amount of cucurbitacin contained in a squash or pumpkin can vary significantly depending on variety and maturity, but the seeds from larger, mature members of the gourd family usually contain higher levels of cucurbitacin. This means that the amount to feed is inexact and that’s why the seeds are usually fed free choice to allow the chickens to self-regulate consumption.

How We Use Fall Decorations For Deworming & Other Benefits

In addition to the natural worming factor, gourd family members are high in vitamins and minerals and can be fed to the flock raw or cooked. Because chickens are so entertained when eating them, many chicken keepers feed whole squash, pumpkins, cucumbers, and melons throughout the year.

We regularly cut a pumpkin, squash, gourd, or melon in half and place it in the chicken run (or coop) to watch the fun. The chickens go crazy eating both the flesh and seeds. Because the seeds are a natural dewormer, there’s no withdrawal time (as there is with chemical dewormers) needed before eggs from the hens can be consumed.

Our roosters normally call the hens to food whenever we add it to the run but don’t stop to eat it themselves. However, it’s a different story when fruit from the gourd family is introduced – they’ll sit down and feast immediately! 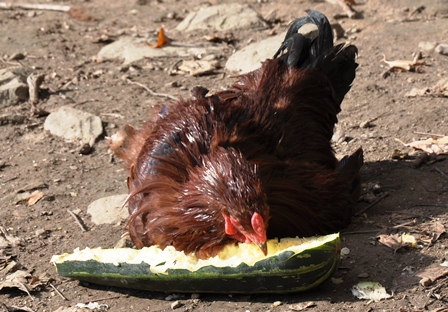 Pumpkins, squash, and melons contain high levels of iron, magnesium, niacin, phosphorous, and thiamine and are even better sources of vitamin A, vitamin C, vitamin E, copper, manganese, and potassium. They are also excellent sources of dietary fiber but are low in saturated fat, cholesterol and sodium. The seeds contribute high levels of protein, magnesium, and zinc. The actual amount of each nutrient depends on the variety and maturity level of the fruit, with nutrients generally being much higher in mature winter squashes and pumpkins than in cucumbers, melons or summer squashes.

Stock Up On Fall Decorations As Natural Dewormers

Since gourd family fruits provide so many benefits for chickens, it’s a good idea to plan on extras as well as store varieties suitable for long-term winter storage. In addition to your fall decorations, after Halloween, you can usually find pumpkin patches or stands that are willing to sell them inexpensively or even give them away. You can also offer to take your neighbors’ jack-o-lanterns and decorations off their hands. They’re usually more than happy to be rid of them by Thanksgiving.

It’s easy to grow all of the Curcurbitaceae plants and they are quite prolific. But, these plants can take up a lot of garden real estate so plan accordingly. They are very frost sensitive and should not be sown outdoors until after the last spring frost. They thrive in warm, nutrient-rich soil. The warmer the soil, the faster they will germinate with the optimal temperature being between 75° and 95° degrees F.  One popular way to grow them is to sow them in small hills consisting of thoroughly mixed loamy soil and composted manure. Hills should be spaced four to six feet apart and planted with four or five seeds at a depth of one to three inches. Once the seeds have sprouted, thin each hill to the strongest two or three plants. For optimal growth, the plants then need lots of heat, light, and water.

Summer squash, cucumbers, and melons produce edible fruit in about 50 to 85 days after planting depending on the variety. They don’t store well so are best used when they ripen. Winter squash and pumpkins take between 80 and 105 days to mature. They make great candidates for long-term storage. Winter squash and pumpkins should be harvested after the fruit turns a deeper color and the rinds harden (usually during September and October), but definitely before heavy frost. The fruits should be cut from the vine carefully, leaving one to two inches of stem attached, and care should be taken not to damage or bruise the fruit. Immature, damaged, or bruised fruit will not keep as long in storage and should be used first.

Storing The Excess And Using Them Year-Round

Pumpkins and winter squash can be successfully kept for months if they are properly cured and stored (see Winter Squash: Harvesting, Curing, and Storing). With the exception of acorn, sweet dumpling, and delicata squash (which can go directly into storage), gourd family members do better in storage if they are cured first. To cure winter squash and pumpkins, simply keep them at room temperature (around 70° degrees F) for 10 to 20 days.

After curing, they should be transferred to a dry (60 – 70% relative humidity), cool (50° to 55° degrees F) place like a basement or root cellar for long-term storage. It’s best to store pumpkins and squash in a single layer so that they are not touching each other to prevent the spread of any rot. Any that have soft spots, cuts, breaks, or are missing stems should be used first because they will spoil first in storage.

It’s easy to feed the gourd family fruits to your chickens throughout the year. Fall is the traditional time to deworm by feeding your flock the seeds free-choice for a week. The protein in the seeds is also highly beneficial for birds that are molting and growing new feathers in the fall. 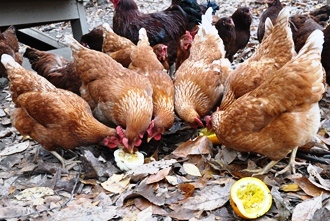 In winter, squash and pumpkins help relieve boredom. By simply splitting whole fruits and placing them inside their coop, you’ll provide your chickens with exercise and something delicious to peck at.

Be sure to save enough pumpkins or squash to feed again in spring as a preventative measure against worms.

Finally, in summer feed your chickens the seeds and pulp from any cucumbers or cantaloupe you clean out, feed the leftover rinds from cantaloupe and watermelon, and if you have excess zucchini feed them too – the chickens will devour them!

Farmers have been using them this way for hundreds of years to help keep their chickens healthy, the chickens love them, and they’re a nutritious and entertaining treat. This is one easy way to keep your chickens healthy and happy!

The contents of this site are the property of Better Hens and Gardens. All content contained herein is copyrighted. We love it when you share, but if you do, please link back to the original post. Material included here is not intended to be, nor does it constitute, the giving of medical advice. This blogs content is for informational purposes only and Better Hens and Gardens or others associated with this site shall not be held liable for any damages incurred through the use of information provided in this blog. Better Hens and Gardens accepts products for review and other forms of paid advertising; however, although compensation received may influence the content or topics covered in this blog, it will never influence our opinion of any product. The views and opinions expressed in this blog are purely those of Better Hens and Gardens. Any product claim or other representation about a product or service should be verified by the manufacturer. Better Hens and Gardens is a participant in the Amazon Services LLC Associates Program, an affiliate advertising program designed to provide a means for us to earn fees by linking to Amazon.com and affiliated sites.
PRIVACY POLICY
12.2K shares