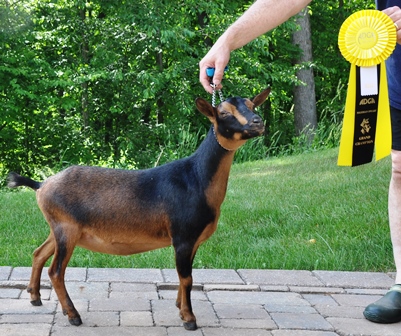 This past weekend, we took some of our Nigerian Dwarf goats to participate in our second goat show (we went to one last year). It was fun and a learning experience too – the does that are in milk decided that they really didn’t like the water at the goat show (it was located in Carrollton,  Ohio). They taught us that if goat does don’t drink water, they don’t make milk, and if they don’t make milk, they don’t do well at a dairy goat show. After all, showcasing their fantastic ability to produce milk is what a dairy goat show is all about. So, our milking does didn’t bring home any ribbons.

The junior does were a different story though. Both of the polled (naturally hornless) does that we retained this year brought home blue ribbons (first place wins). They were competing against each other (as well as against many others), but there were two show rings and Amethyst won in Ring 1 while Charm Box won in Ring 2. And then there was Taylor Quinn, she won in both rings, and then took the Grand Champion Junior Doe title. That gives her a championship dry leg (meaning a championship win while not in milk), and a doe can only earn one (that is good toward permanent championship) so she can’t advance any further until she’s in milk. Woo hoo on a Grand Champion win for Taylor Quinn! 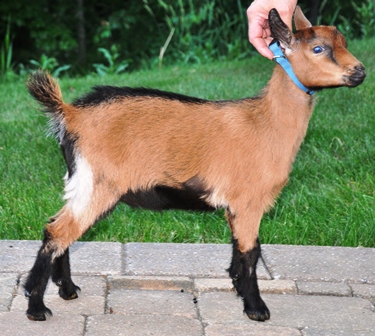 We’re beginning to realize that there’s a lot that goes into getting the goats ready for a show (just getting the littlest ones to walk around the ring is a challenge), and that we’ve got a lot more to learn about how to best prepare the does so that they’re well presented (and have respectable looking udders). But, we enjoyed it so we’ll try it again at least once this year. Lots of goat things going on now – the kids that we didn’t retain are all leaving (and we’re sad to see them go), there are dairy goat shows to attend, and we’re participating in linear appraisal tomorrow to see how the goats stack up against the dairy goat scorecard – goat fun! 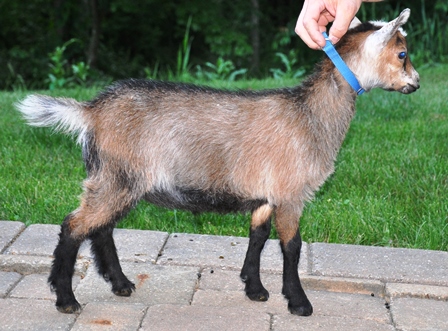