Growing rhubarb is so easy, everyone should have a  plant or two! And when the rhubarb plants emerge, it’s a sure sign of spring!

Rhubarb is super easy to grow, comes back every year, and makes fantastic pies, custards, and crisps! But, you actually grow it to eat the stalks – the flower heads need to be cut off.

Here’s all you need to know to grow your own tasty, perennial rhubarb:

How To Grow Rhubarb

Rhubarb can be grown just about anywhere, but prefers full sun and needs a well-drained location.

Several years ago I planted some in a protected nook, and it died. So next I put some in one of my sunniest locations, and it’s thriving.

I like to tuck in a plant in here and there in flower borders too; they provide some nice foliage contrast.

How to Start Growing Rhubarb

The corms should be planted about 3 or 4 inches deep with the buds a couple of inches below the soil surface. Many seed suppliers carry rhubarb or you can get some from a friend’s rhubarb patch.

The first year after planting rhubarb, none of the stalks should be harvested. The plant(s) should be allowed to use all its energy to establish a strong root system. Removing stalks in the first year causes the plant to expend energy for leafy top growth instead.

Feed the plant(s) by top dressing with compost in fall and spring.

You can start harvesting rhubarb the second year after planting but be sure to cut off any flower stalks (see the photo below of a flower stalk) immediately. The plant will expend a considerable amount of its energy-producing flowers, but since we want the stalks, the flowers should be removed.

Continue top dressing with compost in spring and fall as rhubarb plants will continue producing for many years (perennial) once established. 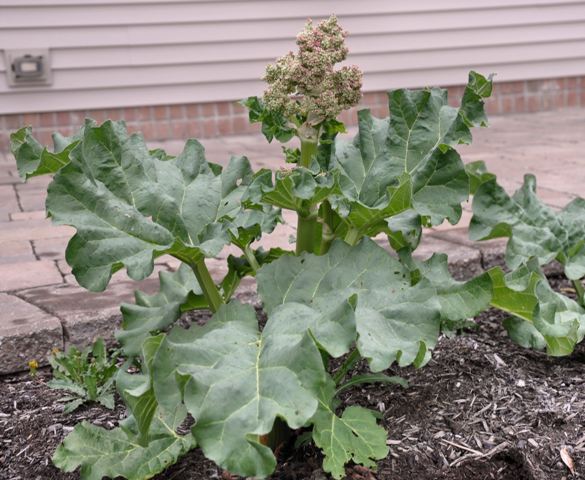 Harvest rhubarb by grasping a stalk and twisting sideways to remove the entire stalk. Don’t use a knife to cut rhubarb. That leaves a part of the stalk still attached to the crown and may encourage rot. Rot is one of the few serious diseases afflicting rhubarb.

You can harvest for about six weeks each spring, but no more than a third of the stalks should be harvested. Be sure to leave the plants with enough foliage to sustain themselves through the winter.

Rhubarb leaves should never be eaten; they are poisonous. Only the stalks should be eaten. After harvesting, besides cooking immediately, the stalks can be cut into pieces and frozen for use later in pies and crisps. 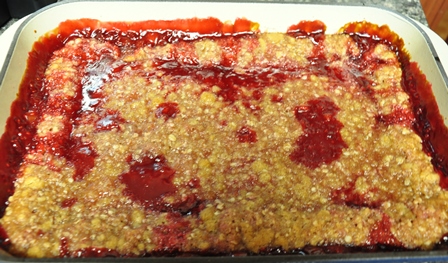 Other than rot, rhubarb is not much affected by disease and insects.

Canada Red, Valentine, and MacDonald are varieties known to be tender and sweet. 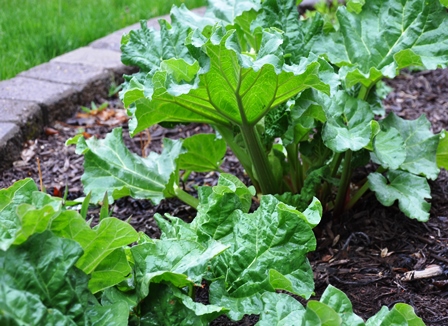 So, rhubarb is a plant that comes back year after year, makes tasty pies and custards, isn’t affected by diseases or insects, and can be tucked into the landscape just about anywhere – seems like every homestead should be growing a few rhubarb plants!

The contents of this site are the property of Better Hens and Gardens. All content contained herein is copyrighted. We love it when you share, but if you do, please link back to the original post. Material included here is not intended to be, nor does it constitute, the giving of medical advice. This blogs content is for informational purposes only and Better Hens and Gardens or others associated with this site shall not be held liable for any damages incurred through the use of information provided in this blog. Better Hens and Gardens accepts products for review and other forms of paid advertising; however, although compensation received may influence the content or topics covered in this blog, it will never influence our opinion of any product. The views and opinions expressed in this blog are purely those of Better Hens and Gardens. Any product claim or other representation about a product or service should be verified by the manufacturer. Better Hens and Gardens is a participant in the Amazon Services LLC Associates Program, an affiliate advertising program designed to provide a means for us to earn fees by linking to Amazon.com and affiliated sites.
PRIVACY POLICY
1.8K shares