These days, we’re all trying to cut costs without sacrificing quality, and growing heirloom vegetables is a smart strategy for doing just that.

Heirloom vegetables are the old-fashioned, open-pollinated varieties that breed true from year-to-year. This leads to some definite benefits for the backyard gardener.

Why Heirloom Vegetables Are Better:

There are two ways that heirloom seeds save money; 1) they cost less than their hybrid counterparts and 2) you can save the seeds from year-to-year, thereby cutting seed costs.

Hybrid seeds are the result of deliberately crossing different varieties (think labor-intensive), so they’re typically more expensive than open-pollinated (heirloom) seeds. Also, because they’re crossed, seeds from hybrids do not breed true and can’t be saved from year-to-year.

Seed companies promote hybrids because they’re more profitable for them; but, heirlooms are generally more economical for home gardens.

Our ancestors saved their vegetable seeds by necessity, selecting only outstanding plants for next year’s seeds. These seeds were carefully preserved, traded with friends, and passed to the next generation.

This resulted in plants slowly developing resistance to local diseases and insects, and also gradually becoming well adapted to local climate and soil conditions. By following this same strategy, we can develop strains for our own gardens that become more resilient every year. 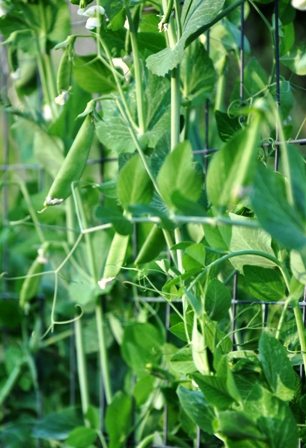 Even if you’re not interested in growing plants from seed, there are still benefits to using heirlooms. And, heirloom transplants are becoming increasingly available at garden centers, as home gardeners rediscover their advantages:

Most hybrids are bred for commercial applications, which means uniformity and simultaneous ripening are promoted. Growers want to harvest fields just one time.

The most exciting advantage of heirloom vegetables is their flavor. The hybrid vegetable varieties were developed for mechanical harvesting and mass transit, meaning tough skins and solid flesh, not flavor.

Heirlooms, on the other hand, have been selected for rich flavor and tenderness for decades. You can count on these vegetables to be delicious.

When developing the hybrid varieties, the breeders also focused on getting higher yields, which for vegetables, means selecting the highest carbohydrate levels. But this often results in lower nutrient levels.

For gardeners growing a few plants, high yields don’t make much difference; but nutrient-dense vegetables do.

Vegetables that are mainly self-pollinating; like beans, eggplant, lettuce, peas, peanuts, peppers, and tomatoes, are the easiest to save for seed. Planting different varieties of these at least ten feet apart usually prevents cross-pollination.

Vegetables that are pollinated by wind or insects need to be isolated or separated by large distances to prevent cross-pollination. These vegetables include beets, broccoli, cabbage, carrots, cauliflower, corn, melons, onions, pumpkins, radishes, spinach, squash, and Swiss chard. The easiest way to ensure purity for these, in a small garden, is to grow only one variety at a time.

Heirloom Varieties for Your Garden

We can get a jump on heirlooms adapted to our gardens by selecting varieties that are popular locally. Check at the local feed & seed supply or farmers’ market. Ask what varieties are popular and do best in the area, and then start with some that appeal to you. That’s exactly what I do each year, research new (to me) heirloom varieties for my garden!

Lots of heirlooms can also be found online today, there are a few sources listed below:

The contents of this site are the property of Better Hens and Gardens. All content contained herein is copyrighted. We love it when you share, but if you do, please link back to the original post. Material included here is not intended to be, nor does it constitute, the giving of medical advice. This blogs content is for informational purposes only and Better Hens and Gardens or others associated with this site shall not be held liable for any damages incurred through the use of information provided in this blog. Better Hens and Gardens accepts products for review and other forms of paid advertising; however, although compensation received may influence the content or topics covered in this blog, it will never influence our opinion of any product. The views and opinions expressed in this blog are purely those of Better Hens and Gardens. Any product claim or other representation about a product or service should be verified by the manufacturer. Better Hens and Gardens is a participant in the Amazon Services LLC Associates Program, an affiliate advertising program designed to provide a means for us to earn fees by linking to Amazon.com and affiliated sites.
PRIVACY POLICY
584 shares