Bramblestone Farm does earned their milking stars in both ADGA and AGS!

For the first time in 2013, we entered all of the mature Nigerian Dwarf goats into the USDA milk production testing Dairy Herd Improvement Registry (DHIR). DHIR testing is the nationally recognized system for evaluating the milk production and milk components of dairy animals. It’s a method of statistically measuring a 305 day lactation for an animal by obtaining monthly milk weights and sampling the milk for components.

By producing the required amount of milk, butterfat, or protein, a goat can earn her Advanced Registry stars (*M for ADGA and/or *D for AGS) in the American Dairy Goat Association (ADGA) and/or American Goat Society (AGS). The star certifications are a method of designating those goats that have been proven to be very good producers for their breed.

DHIR milk testing is performed by having a tester weigh milk produced by each individual goat in two consecutive twelve-hour periods each month, taking a milk sample from each weigh sample, and submitting the samples to the DHIR laboratory to measure butterfat, protein, and somatic cell count. After analyzing the samples, herd summary and individual goat summary reports are sent back to the herd owner.

A standard lactation is typically 305 days, and the goats have that long to meet the minimum requirements, but it didn’t take the girls nearly that long. Some of the girls had already passed the minimum requirements for ADGA after our sixth test; however, after our seventh test and about 200 days, all four of the girls met the requirements in both registries! 3*M Old Mountain Farm Hot Tea 3*D already had her milking stars when we bought her, but the three does that didn’t have their milking stars now become 1*M Wildwind Farm Tinkerbell *D, 1*M Wildwind Farm Bit ‘O’ H 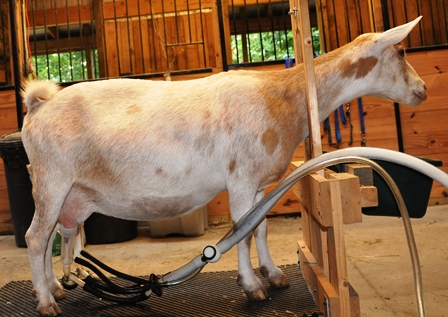 A lot of time, effort, and expense are involved in going on milk production testing, but it’s one of the only ways to get data to make good management decisions and improve the herd. There’s a lot of information in the reports (big dairy herds have used them for years) and we just beginning to learn how to interpret them, but some of the things they can be used for are:

The Nigerian Dwarf goat breed is relatively young (recognized in a registry as a breed starting in 1981), and one of the things I find most fascinating is how much the breed has improved (in dairy terms) in a relatively short time. It’s because of the work of careful and informed breeders, and we want to continue that process of continuous breed improvement with the Bramblestone herd. Milk production testing is one of several important tools for documenting the performance of does and achieving herd improvement.