Eggplant generally does pretty well in our garden; and when there’s lots of eggplant coming in, then 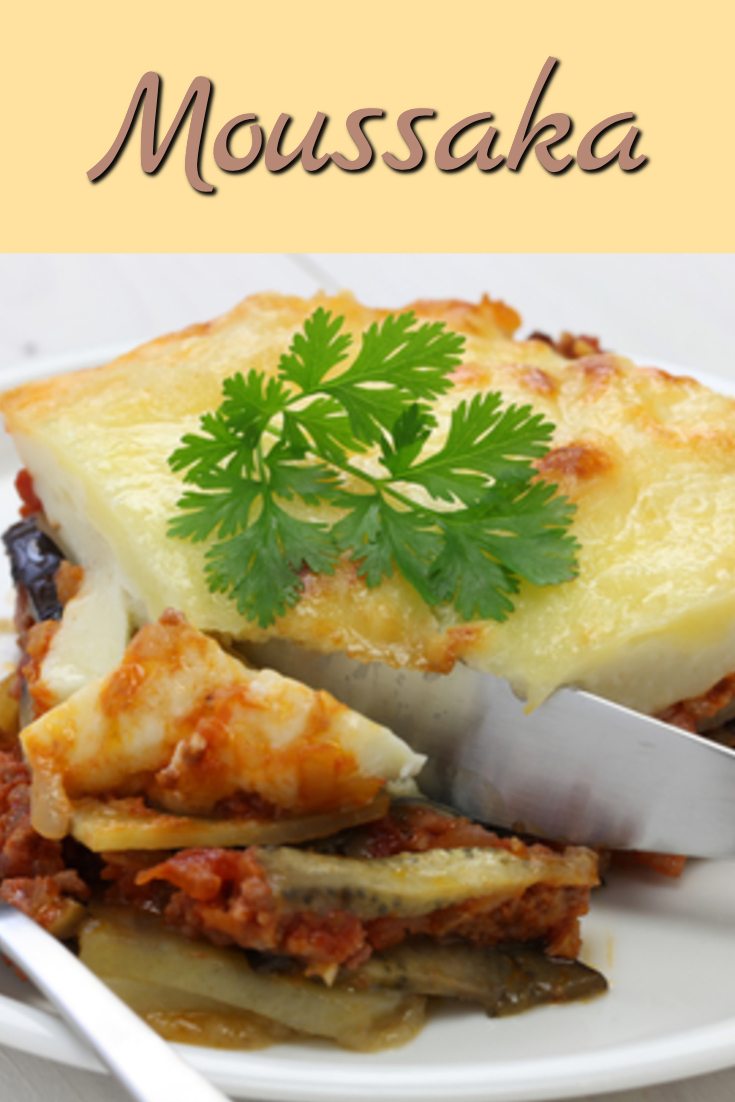 it’s time to make Moussaka. It tastes wonderful, and it’s a good dish for a crowd – you can prepare it ahead of time and bake just before serving.

Moussaka is a something like a shepherd’s pie but made with ground meat, eggplant, tomato, seasonings and covered with a creamy bechamel sauce.

Some folks think that they don’t like eggplant, but it takes on the flavor of whatever you’re cooking with it. It really doesn’t have much flavor of its own.

I learned this early when my great-grandmother was stretching a small amount of ground beef into a meal by adding eggplant to make eggplant hamburgers.

I watched as she made them and informed her that I wasn’t eating those hamburgers, they couldn’t possibly taste good. She said I had to try some, then if I didn’t like it she’d make me something else.

I was shocked – those were the best-tasting hamburgers I’d ever tasted! Talk about the magic of grandma’s cooking. From that day on, I’ve always liked eggplant.

The eggplant variety that we grow is the old open-pollinated heirloom Black Beauty. It’s one of the heirloom varieties that’s always done well for me in the garden – I’ve never tried a hybrid variety that I liked better. It invariably produces enough eggplant so that we can make lots of moussaka.

Moussaka Just Out Of The Oven

This recipe is adapted from The Victory Garden Cookbook, by Marian Morash. We like things a little spicy so I substituted jalapeno peppers for standard peppers – if you don’t like things spicy you might want to use regular peppers instead.

Make the bechamel sauce for the top:

Tried this recipe?Let us know how it was!

The contents of this site are the property of Better Hens and Gardens. All content contained herein is copyrighted. We love it when you share, but if you do, please link back to the original post. Material included here is not intended to be, nor does it constitute, the giving of medical advice. This blogs content is for informational purposes only and Better Hens and Gardens or others associated with this site shall not be held liable for any damages incurred through the use of information provided in this blog. Better Hens and Gardens accepts products for review and other forms of paid advertising; however, although compensation received may influence the content or topics covered in this blog, it will never influence our opinion of any product. The views and opinions expressed in this blog are purely those of Better Hens and Gardens. Any product claim or other representation about a product or service should be verified by the manufacturer. Better Hens and Gardens is a participant in the Amazon Services LLC Associates Program, an affiliate advertising program designed to provide a means for us to earn fees by linking to Amazon.com and affiliated sites.
PRIVACY POLICY
55 shares