I used to think that growing potatoes (see HERE for more potato background) in the garden was too much work for the end result. Then a friend’s homegrown Yukon Gold potatoes completely changed my mind. Like almost anything that’s homegrown, they just tasted so much better than potatoes from the grocery store.

That’s when we started growing our own potatoes and found that in addition to tasting much better than store-bought potatoes, they were really an easy crop to grow. And, that many varieties store well in the root cellar so we could have great tasting potatoes nearly year-round.

Now, we grow potatoes every year and our potato planting preparations include pre-sprouting (also known as greensprouting) & cutting seed potatoes. These practices encourage early growth, improve yields, and speed up the production of tubers.

Fast, early growth is beneficial when growing potatoes. If you can get them in, grow them quickly, and get them harvested fast there’s less chance that pests (see Controlling Potato Beetles) or bad weather will damage your crop of potatoes.

How To Pre – Sprout Seed Potatoes

We purchase certified organic seed potatoes (for example the organic seed potatoes from Wood Prairie Farm) early in the season when there is a good selection of varieties. We store them in a cool (40 degrees) dark root cellar until about two weeks before I intend to plant them. Potatoes shouldn’t be planted until the soil temperature reaches 50°F. The varieties shown in the photos below are Yukon Gold and Purple Viking.

Then I spread them out on a tray in a room with medium light and 70-degree temperatures. The warmth promotes the development of strong sprouts. The light causes the sprouts to stay short and stubby (not weak or easily broken off). This step adds a little more work, but results in quicker tuber development and also heavier yields. 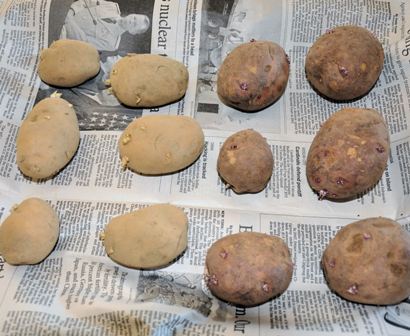 The photo above shows the whole seed potatoes prior to pre-sprouting while the photo below shows them after pre-sprouting. Pre-sprouting or greensprouting can reduce the time to mature potatoes in the field by 10 – 14 days. We pre-sprout the entire potato crop since we have a fairly short growing season. We use every method we know to get the crop in and grown quickly.

After cutting, the seed pieces should be left at room temperature for at least twenty-four hours. This allows them to firm up and reduces the chance of rotting. To further minimize the chance of rot, the cut surfaces can be dusted with calcitic or dolomitic agricultural lime or sulfur. After twenty-four hours, I plant them using the “Lazy Bed Potato Planting Method”. 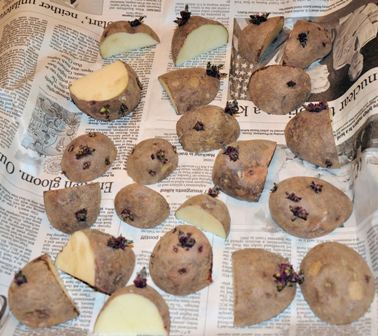 We’ve found that by using these methods for preparing the seed potatoes for planting, using the lazy bed method for growing the potatoes, and making sure that we ALWAYS rotate the potato crop (see Garden Crop Rotation – A Simple System) potatoes are a really easy and productive crop for us to grow each year.

The contents of this site are the property of Better Hens and Gardens. All content contained herein is copyrighted. We love it when you share, but if you do, please link back to the original post. Material included here is not intended to be, nor does it constitute, the giving of medical advice. This blogs content is for informational purposes only and Better Hens and Gardens or others associated with this site shall not be held liable for any damages incurred through the use of information provided in this blog. Better Hens and Gardens accepts products for review and other forms of paid advertising; however, although compensation received may influence the content or topics covered in this blog, it will never influence our opinion of any product. The views and opinions expressed in this blog are purely those of Better Hens and Gardens. Any product claim or other representation about a product or service should be verified by the manufacturer. Better Hens and Gardens is a participant in the Amazon Services LLC Associates Program, an affiliate advertising program designed to provide a means for us to earn fees by linking to Amazon.com and affiliated sites.
PRIVACY POLICY
9.1K shares