When we think of vegetables, we know that raw, unprocessed vegetables have higher nutritional value than their cooked counterparts, and honey is no different.

Raw honey is honey that hasn’t been heated or pasteurized, and it contains natural vitamins, enzymes, powerful antioxidants, and other important nutrients. Raw honey has anti-bacterial, anti-viral, and anti-fungal properties, and promotes digestive health.

When honey is removed from the hive, it needs to be strained to remove parts of bee bodies and pieces of wax. If a coarse strainer is used without heating, then the honey will contain the pollen that was present in the original honey from the local area. If this local honey is ingested regularly, it can reduce pollen allergy symptoms in humans.

By supporting local honey producers, you can verify that the honey you’re purchasing is truly raw and has the beneficial properties that humans have used for centuries to treat many ailments. 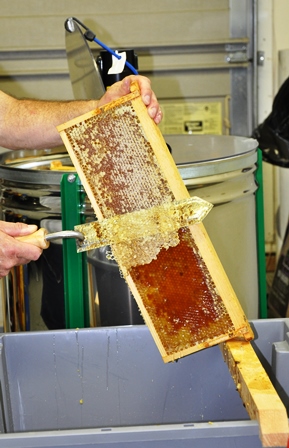 Most commercial honey; however, does not use the processing method described above. Instead, very fine filters are used along with heat to create pasteurized honey that no longer contains pollen but that has a long shelf life. This pasteurized, ultra-filtered honey does not have the nutritional benefits of raw honey.

In the U.S., the FDA says that any product that’s been ultra-filtered and no longer contains pollen isn’t honey. But, no ones checking U.S. honey to see if it contains pollen.

Ultra filtering is a procedure where honey is heated, sometimes watered down, and then forced at high pressure through extremely small filters to remove pollen (which is the only foolproof method of identifying the source of the honey). It’s a technique refined by the Chinese, who have illegally dumped tons of their honey (some containing illegal antibiotics and other substances such as heavy metals) on the U.S. market for years.

What’s the Difference Between Raw and Processed?

Food Safety News decided to test honey sold in various outlets to find out whether it was truly honey. They purchased more than 60 jars, jugs and plastic bears of honey in 10 states and the District of Columbia. After having them analyzed, they found that:

If it’s not honey, and it doesn’t have the nutritional benefits of honey – what’s the point of buying what’s in the stores? Local real honey will probably cost more, but at least you’ll know it has the health benefits of real honey. Support your local apiarist and honey bees! 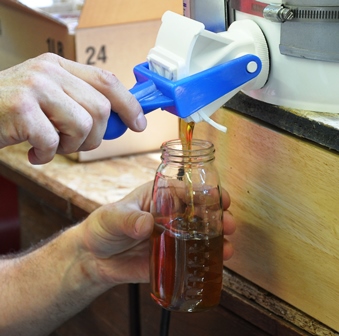 The contents of this site are the property of Better Hens and Gardens. All content contained herein is copyrighted. We love it when you share, but if you do, please link back to the original post. Material included here is not intended to be, nor does it constitute, the giving of medical advice. This blogs content is for informational purposes only and Better Hens and Gardens or others associated with this site shall not be held liable for any damages incurred through the use of information provided in this blog. Better Hens and Gardens accepts products for review and other forms of paid advertising; however, although compensation received may influence the content or topics covered in this blog, it will never influence our opinion of any product. The views and opinions expressed in this blog are purely those of Better Hens and Gardens. Any product claim or other representation about a product or service should be verified by the manufacturer. Better Hens and Gardens is a participant in the Amazon Services LLC Associates Program, an affiliate advertising program designed to provide a means for us to earn fees by linking to Amazon.com and affiliated sites.
PRIVACY POLICY
1.5K shares