This is the time of year in our area that the honey bees start swarming. They’ve been active 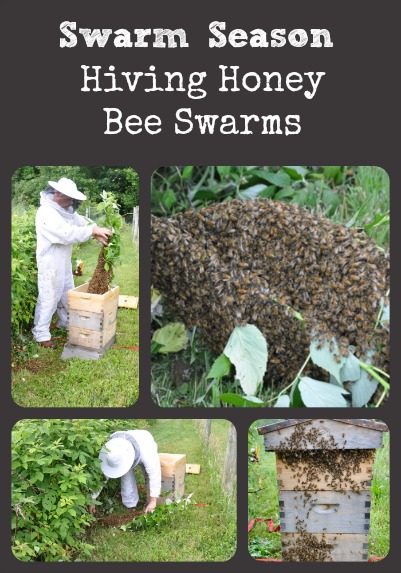 since spring and there has been lots of good bloom going on, so the hives have grown and some are becoming crowded.

As soon as a queen notices her hive’s becoming a little crowded, she’ll lay some queen cells and when one hatches out, she leaves and takes part of the original hive with her in a “swarm”. I was working down in our garden (which our hives surround), and noticed that one of the hives had swarmed and the bees were temporarily camping out on our raspberries.

Catching the swarm and homing it in a new hive is an easy way to increase your bee hive numbers, so I’m always on the lookout for swarms during the summer.

Most folks think that catching a swarm and homing it in a hive is difficult, but it’s really very easy. 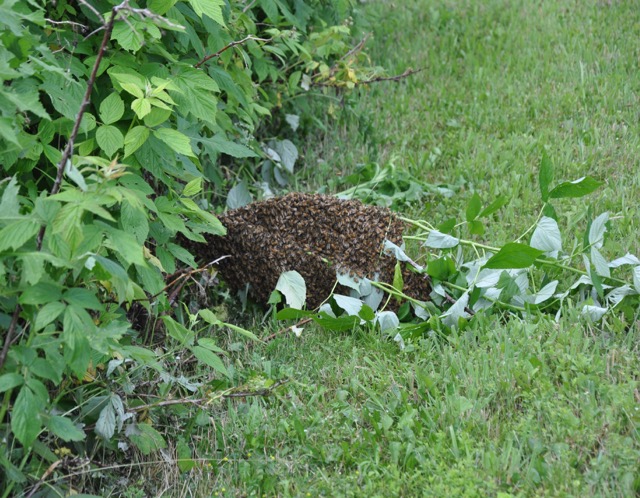 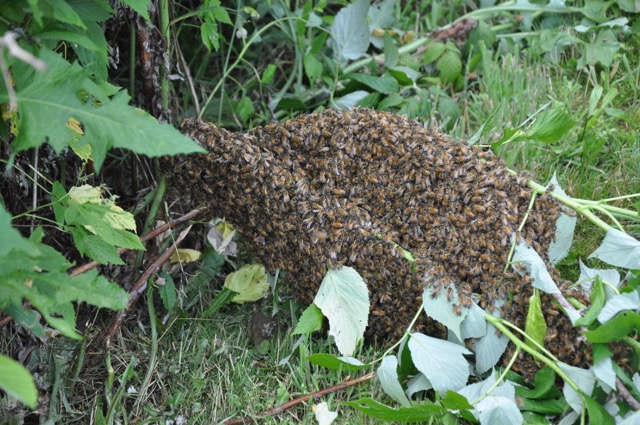 Getting them into a new home is as simple as picking up as much of the swarm as possible (notice that he’s not even using gloves), 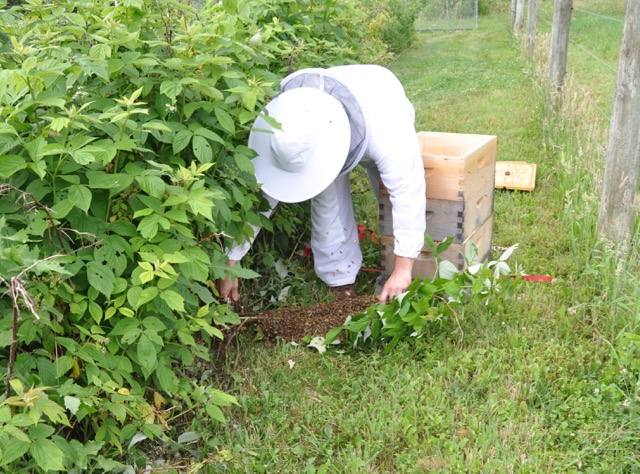 and dropping them into their new home. 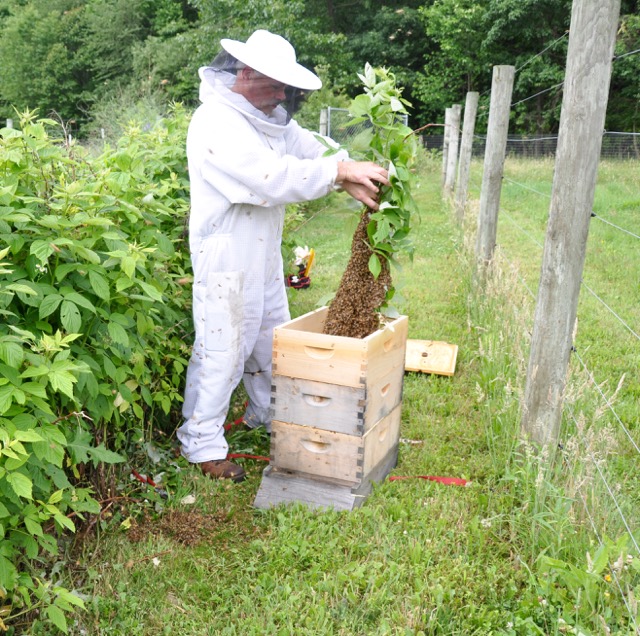 Wasn’t that easy? As long as you’ve captured the queen in the hive, everything should go well. 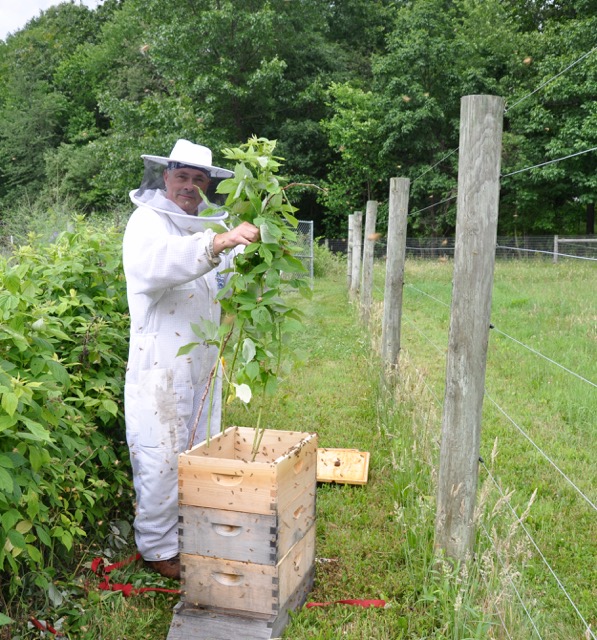 Now just put the hive lid back on, 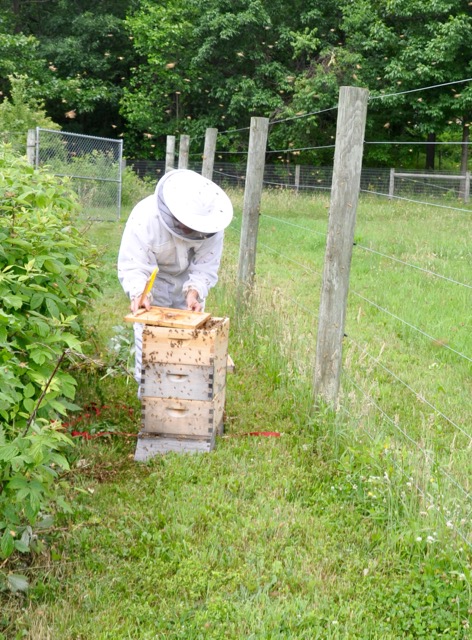 And wait for all the bees that didn’t make it in with the swarm to find their way into the hive. 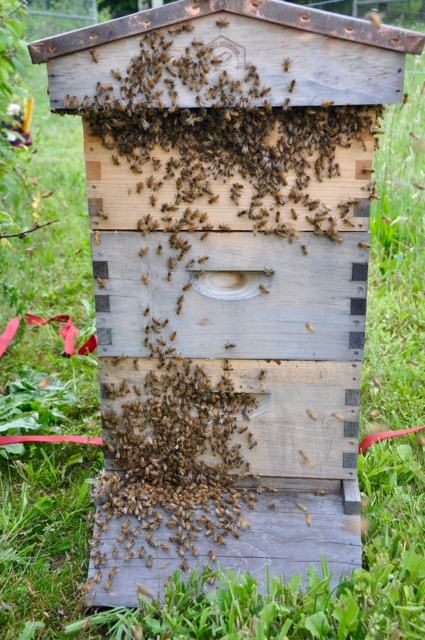 By the time night falls, all of the bees will have made it into the new hive (they’re following the scent of the queen), and it can be moved to its new location. 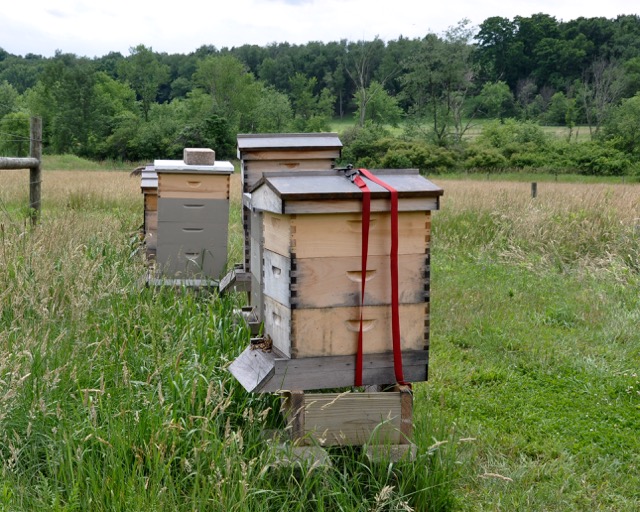 And here’s the new hive the next day, it looks like activity is normal, and the bees are busy getting their new home in order.

I’m very sure it’s swarm season now, because we got another call today to pick up another swarm!

The contents of this site are the property of Better Hens and Gardens. All content contained herein is copyrighted. We love it when you share, but if you do, please link back to the original post. Material included here is not intended to be, nor does it constitute, the giving of medical advice. This blogs content is for informational purposes only and Better Hens and Gardens or others associated with this site shall not be held liable for any damages incurred through the use of information provided in this blog. Better Hens and Gardens accepts products for review and other forms of paid advertising; however, although compensation received may influence the content or topics covered in this blog, it will never influence our opinion of any product. The views and opinions expressed in this blog are purely those of Better Hens and Gardens. Any product claim or other representation about a product or service should be verified by the manufacturer. Better Hens and Gardens is a participant in the Amazon Services LLC Associates Program, an affiliate advertising program designed to provide a means for us to earn fees by linking to Amazon.com and affiliated sites.
PRIVACY POLICY
1.0K shares