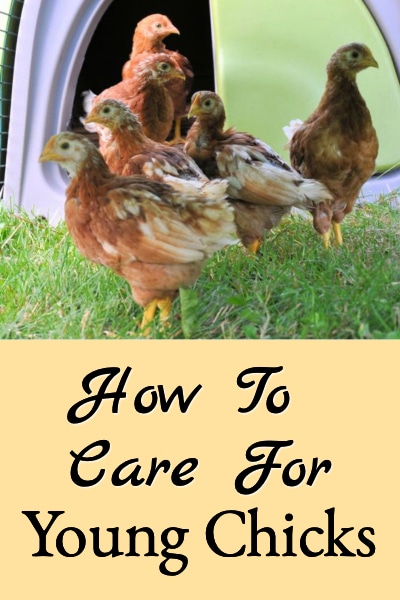 Young chick care wasn’t something we were initially familiar with because we eased into chicken-keeping by first getting three pullets (to make sure that we enjoyed having our own chickens).

That was a huge success, so we eventually decided to get a traditional coop and add more hens.

However, six young chickens came with the new coop (see New Chicken Coop) and were a complete surprise, so we scrambled to accommodate them.

Preparing for them really just came down to what is best for housing, feeding, and watering five-week-old chicks so they would attain their full potential as healthy, happy, productive chickens (for raising day-old chicks, she Raising Day-Old Chicks).

For housing, baby chickens are started in a brooder with a heat lamp until they are about 4-5 weeks of age. So, we first verified that these chicks had been moved out of the brooder, and no longer needed a heat lamp. We also took a good look at the chickens and made sure they had most of their feathers so they could moderate temperatures like a mature bird. With that established, housing for these young chickens is nearly identical to that for mature chickens – maybe just a little smaller.

All chickens need protection from predators, ventilation, and roosts in their housing. Also, young chickens can fly amazingly well (I nearly lost one finding out how well), and they’re too young for feather clipping so something that contains them is necessary too.

Obviously, we could have used the new coop, but when I questioned “painting the coop inside” on the Backyard Chicken forum, the response was unanimously in favor of painting – to make it easier to clean and harder for parasites to infiltrate. So, to give us time to paint the interior of the new coop (see New Chicken Coop Paint Protection), we cleaned up the old Eglu and used that instead.

The Eglu is specifically designed to meet the housing needs of chickens, and it can be moved around the yard to give them fresh forage until the big coop is ready. It’s insulated, has a small covered run, feeder, waterer, roosts with removable dropping tray, and has ventilation holes. In short, a pretty nice temporary house for six young chickens.

There are lots of choices for feeding chickens; commercial feed, free-ranging plus commercial feed, home-mixed rations, and everything in between. These girls were receiving commercially-prepared, medicated feed, so we chose to continue with that. Commercially prepared feeds for chicks up to 8 weeks old are generally referred to as “starter” rations and I recommend them as a good way to get chicks off to a healthy start. The companies producing these feeds spend millions making sure they contain the proper nutrients, and it’s important that the chicks consume a balanced ration because they grow incredibly fast.

Starter rations come either medicated or non-medicated, with the medication being antibiotic to prevent coccidiosis. Coccidiosis is an intestinal disease that interferes with nutrient absorption and is not usually a problem during cooler months (coccidia flourish in warm, humid conditions), or for smaller flocks raised in sanitary conditions. Since these chicks were already being fed medicated rations and temperatures are warm now, we chose to continue although we started mixing un-medicated feed in gradually.

After 6-8 weeks, the chicks can be switched to “developer” in areas of the country where developer rations can be found. These feeds generally aren’t medicated and contain lower protein levels than the starter rations (once chickens have made their feathers their protein needs go down slightly). In many areas, the developer rations are hard to find, and there is only a “starter/grower” type ration. Whatever is available, probably the important thing is to switch the chicks off medicated feeds so they develop strong immune systems.

If the chicks are eating only commercial feed, then grit isn’t necessary, but if they’re also free-ranging or getting table scraps, then free choice grit should be provided. It’s the only “teeth” chickens have. Oyster shell isn’t necessary until they’re older and ready for laying, and “layer” rations should never be fed to young chickens because the higher calcium levels (for strong eggshells) can seriously damage the kidney of young birds. For these chicks, we move the Eglu every day to give them access to fresh grass and clover so they needed grit.

Chicks must have access to fresh, clean water at all times. They need to drink a lot (2-3 times as much as they eat) of water to grow and develop properly, so the water supply needs to be constantly monitored. There are many inexpensive types of chick waterers available, but the Eglu has containers for water that hang from the run wall, and seem to be working quite well.

With the housing, feed, and water provisions we’ve made, these chicks seem to be prospering. We observe them playing together often, they enjoy foraging even at this young age, and they’re already happily dust bathing to keep clean. The changes we’ve observed going from 5 to 7 weeks old are amazing.

When foraging, they really like clover, and they also love grapes. We wanted to accustom them to being handled, so we pick them up each day and feed them small pieces of grape. Although it was obvious they hadn’t been handled much previously, within three days they were anxiously awaiting pick-up – so they could get their grapes.

The contents of this site are the property of Better Hens and Gardens. All content contained herein is copyrighted. We love it when you share, but if you do, please link back to the original post. Material included here is not intended to be, nor does it constitute, the giving of medical advice. This blogs content is for informational purposes only and Better Hens and Gardens or others associated with this site shall not be held liable for any damages incurred through the use of information provided in this blog. Better Hens and Gardens accepts products for review and other forms of paid advertising; however, although compensation received may influence the content or topics covered in this blog, it will never influence our opinion of any product. The views and opinions expressed in this blog are purely those of Better Hens and Gardens. Any product claim or other representation about a product or service should be verified by the manufacturer. Better Hens and Gardens is a participant in the Amazon Services LLC Associates Program, an affiliate advertising program designed to provide a means for us to earn fees by linking to Amazon.com and affiliated sites.
PRIVACY POLICY
56 shares