So, once the goats have given birth, the big question is how soon to milk the goats after they freshen. Everyone is anxious for that fabulous goat milk!

Our goats are Nigerian Dwarf goats (see Why You Should Choose Nigerian Dwarf Goats for Milk), which produce the highest butterfat milk of all dairy breed goats (around 6 – 10%), so their milk is incredibly good and makes awesome butter, ice cream, cheese, and yogurt. Obviously, we’d like to get that milk, but the goat kids’ welfare also needs to be considered.

The question is how soon to milk the goats after they freshen and how to feed the kids – do you immediately pull all the kids from their dams and bottle feed them, do you let the dams raise them and wean the kids naturally, do you let the dams raise them for some period of time and then start separating them to get the milk, or do you use a combination of bottle feeding and dam feeding? Each approach has pros and cons:

If there’s any likelihood of disease transmission from the dam to the kids (several fatal goat diseases like CAE, CL, etc. can be transmitted through the milk) then the kids should immediately be pulled and bottle raised.

Most large operations (as well as dairy cattle farms) use this model so there’s no chance of disease transmission and milk production starts immediately. Kids are often collectively fed a milk replacement product from feeders designed to accommodate multiple kids. Smaller operations also use this model to prevent disease transmission, but individually bottle feed the kids.

It’s often advertised that individually bottle-fed kids are better socialized and friendlier as adults and kids can go to new homes as soon as they’re sold (don’t have to wait for dam weaning). However, some think that kids fed replacer never thrive as well as dam raised kids. All of our adult goats have tested negative for any diseases, and we don’t currently have the time to bottle feed the kids, so we’ve never tried this method.

Another approach is to let the dams raise the kids and start milking when the kids are almost exclusively eating solid foods. Usually, the dam will quit letting them nurse (much) at between 8 to 12 weeks, and the kids are happily eating hay and grain by then (although this can vary significantly – some dams will take much longer to totally wean kids).

This approach obviously has the advantage of being less time-intensive than bottle feeding the kids; however, you have to wait a long time for that milk, the dam’s production may decrease as the kids’ consumption declines, and kids can’t leave for new homes until they’re weaned.

We unintentionally used this method once – of 8 kids born that year, only one was a doe so we only retained her. Her dam continued to let her nurse for months, and since she was the only kid, we never did separate them (couldn’t stand the screaming when she was separated) – we just milked the other dams.

Goat kids will start nibbling hay and grain at around 3 days old, and after several weeks don’t really need milk every few hours. So one common method used is that after they’re a few weeks old, the dams are separated from the kids in the morning (making sure the kids have plenty of hay and starter grain to eat, and each other to play with), the dams are milked in the evening, and then everyone is put back together for the night so the kids can nurse again.

Then, at some point the dams and kids are completely separated, milking is done twice a day, and sold kids can leave for new homes. This is the option we’ve chosen – we start separating the dams and kids during the day at 4 weeks, and fully separate them at 8 weeks. This allows us to start milk production a little sooner, the dams still get to raise the kids, kids can leave for new homes after 8 weeks, and we’re in full milk production after 8 weeks. 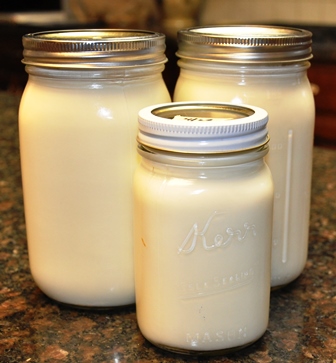 Another approach that’s sometimes used is similar to the one above, except the kids are removed during the daytime at a much earlier age and given a bottle, but then returned to the dam at night. This allows milk production to begin even earlier (or immediately), and kids can be transferred completely to the bottle and leave for new homes as soon as they’re sold.

Some variation on this method is also sometimes used by those specifically interested in preparing their does to do well in the show ring. By removing the kids, it’s believed that the does udders “stretch” and are more impressive in the show ring.

Which of the above methods is better depends on each individual situation. And there are probably an infinite number of ways to begin getting that milk. Whatever method you choose, it should fit your situation and goals – because although goats are very productive little creatures, they should make you happy.

The contents of this site are the property of Better Hens and Gardens. All content contained herein is copyrighted. We love it when you share, but if you do, please link back to the original post. Material included here is not intended to be, nor does it constitute, the giving of medical advice. This blogs content is for informational purposes only and Better Hens and Gardens or others associated with this site shall not be held liable for any damages incurred through the use of information provided in this blog. Better Hens and Gardens accepts products for review and other forms of paid advertising; however, although compensation received may influence the content or topics covered in this blog, it will never influence our opinion of any product. The views and opinions expressed in this blog are purely those of Better Hens and Gardens. Any product claim or other representation about a product or service should be verified by the manufacturer. Better Hens and Gardens is a participant in the Amazon Services LLC Associates Program, an affiliate advertising program designed to provide a means for us to earn fees by linking to Amazon.com and affiliated sites.
PRIVACY POLICY
2.4K shares