Before we could get goats, we had to fence some pasture area; but in addition to keeping the goats in, we wanted a fenced area for the chickens, the predators needed to be kept out, and the garden needed fencing to keep out deer (the garden was being completely devastated!). Since fencing is a long term investment, it pays to do some homework and make sure it’s done right the first time. So,we had several fencing companies review the work, make suggestions, and submit bids. In the end, we went with an Amish company and fenced in three areas – two approximately two acre wooded pastures for the goats and chickens (two so we could rotate the goats between pastures), and one large area for the garden.

For the goat and chicken pastures, it’s obviously important that they can’t go over or through the fencing. Since we plan to stick with Nigerian Dwarf (ND) goats that are less than two feet tall, 4’ fencing is high enough (the chickens could probably fly over but they haven’t figured this out) and we went with 2” x 4” woven wire. Several companies tried to talk us into larger grid spacing for the woven wire and I think larger grid might be ok for adult ND’s, but baby goats and chickens would go right through. The woven wire is mounted to posts every 10 feet for stability. 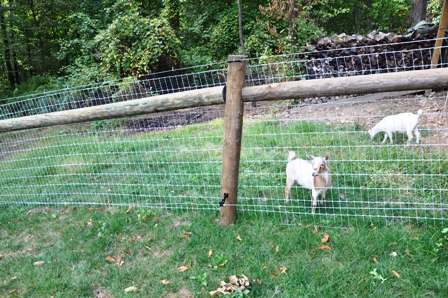 The initial gates the company installed had spacing that was smaller at the bottom and much larger at the top. Additionally, there was quite a bit of room between the gate ends and fence start. These were the standard gates the fencing company used for livestock (think cattle). They didn’t work for us because both the chickens and the goats quickly figured out how to squeeze between the gate and fence, and the chickens learned to go through the larger grids at the gate tops. So, we had the gates remade with all 2” x 4” grid spacing and a tighter fit between fence and gate. For the gate latches, we made sure they required two actions to open, so the goats can’t figure out how to unlatch the gates themselves (they really do take the challenge of escape seriously). 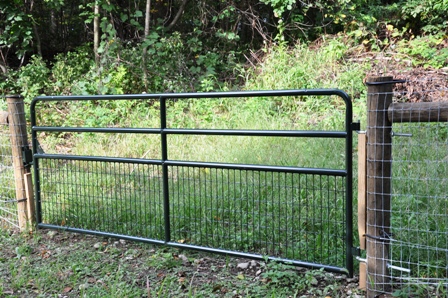 To prevent predators from getting in, electric wire was installed along the top and near the bottom of the pasture fencing. The electric wires were placed outside the woven wire so that anything trying to get in would be shocked, but the chickens and goats aren’t in any danger. For the garden, eight strands of electric wire were evenly spaced on 6’ tall posts to keep the deer and other garden pests out. A buried strand of wire connects the garden electric fencing with the pasture electric fencing, and a switch was installed so power to the garden fence can be cut whenever needed. 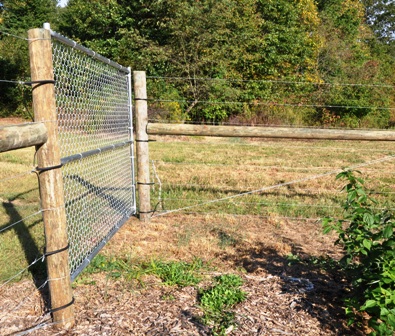 The fencing has been in place for about three months now, and since getting the gates replaced, none of the goats or chickens has escaped. The chickens seem quite happy to free-range in their pasture and none have tried to fly over the fence. The goats still try to get out the gates, but haven’t bothered or stood on the woven wire fence at all. And as far as we know, no predators have made it inside the pasture fence.

Once the garden was fenced, some of the crops recovered and we harvested corn, beans, onions, tomatoes, potatoes, watermelon, chard, and zucchini. Before the fencing went up, I didn’t think we were going to get anything from the garden – it was very discouraging. So far, one possum and one raccoon have managed to get inside the garden area, but they caused minimal damage – especially as compared to deer. Once it was clear something smaller was getting in, we simply set a live trap and caught them.

It took much longer than anticipated to get the fencing up, and we had the set-back with the gates, but I’m happy with the fencing. It looks good too!

The contents of this site are the property of Better Hens and Gardens. All content contained herein is copyrighted. We love it when you share, but if you do, please link back to the original post. Material included here is not intended to be, nor does it constitute, the giving of medical advice. This blogs content is for informational purposes only and Better Hens and Gardens or others associated with this site shall not be held liable for any damages incurred through the use of information provided in this blog. Better Hens and Gardens accepts products for review and other forms of paid advertising; however, although compensation received may influence the content or topics covered in this blog, it will never influence our opinion of any product. The views and opinions expressed in this blog are purely those of Better Hens and Gardens. Any product claim or other representation about a product or service should be verified by the manufacturer. Better Hens and Gardens is a participant in the Amazon Services LLC Associates Program, an affiliate advertising program designed to provide a means for us to earn fees by linking to Amazon.com and affiliated sites.
PRIVACY POLICY
118 shares