It’s starting to feel a bit like fall, so it’s time to think about integrating pullets (the female chicks that hatched in the springtime) into the main chicken flock.

It seems that we’ve had female chicks (which have grown into pullets) to introduce into the flock every fall for the past several years, and every year we get a little better at getting them introduced without “pecking order” scuffles.

The process described below is for chicks that have already been on your property for at least thirty days, any new birds should be quarantined for 30 days for biosecurity reasons before being integrated into the flock (very important for preventing the spread of disease to your flock – see Practice Biosecurity!).

Also, it’s always better to introduce several new birds together, that way the mature hens don’t have just one interloper to concentrate on. 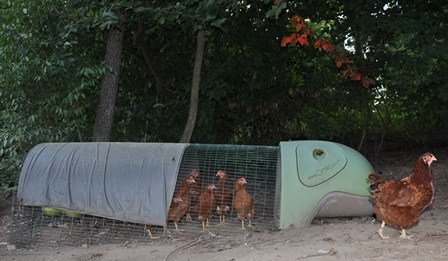 Pullets Inside Pen in Chicken Pasture

Why the “Integrating Pullets” Process Should Be Done

Your flock knows that the coop and run are “their” territory, and will not welcome any new chickens. They also have a pre-established “pecking order”, and will immediately peck at new birds to try to put them in their place. This can become vicious, and new birds may be injured if they can’t escape.

Because of this, many guides on chickens suggest sneaking the new birds into the main coop at night, thereby mixing up the pecking order and giving everyone a fresh start in the morning. When introducing young hens (pullets), I haven’t found that this works that well. The mature hens know who the pullets are and immediately start “picking” on them in the morning anyway.

To ease the combination process, we’ve found that it’s better to let the pullets mingle with the adult birds – without each group really having access to each other. To do this, we put a portable coop and run in the adult chicken pasture and house the pullets in that coop for a week or two. That way, when it’s time to let the pullets out into the larger pasture, the two groups are already familiar with each other. It also introduces the pullets to the sights and sounds of the chicken pasture without exposing them to any of the dangers.

When To Integrate Pullets

Fourteen weeks is generally when I think pullets are large enough to integrate into the main flock, and it usually coincides with the arrival of fall if the chicks were hatched in the spring. It’s a good idea to try to introduce them a couple of weeks before they start laying, so it can vary depending upon the breed. The Leghorn and sex-link (black sex-link, golden buffs, etc.) egg-laying breeds usually start laying at 17 – 18 weeks, so introducing them beginning around 14 weeks makes sense. Most of the purebred breeds (Rhode Island Reds, Buckeyes, Barred Rocks, etc.) start laying a few weeks later, so you can start introducing them a couple of weeks later.

At first, we let the pullets continue to eat and drink from the portable coop/run and return there at night to sleep (we close the coop at night to protect the birds from predators). But after about a week, we let the adult birds finish the supply of layers ration in the main coop, and replace it with the grower’s ration that the pullets have been eating.

After the pullets begin sharing the main coop with the flock, it’s better to feed the entire flock the grower/conditioner that the pullets have been eating, rather than feeding the layer ration that the mature hens have been eating. The higher calcium levels in the layer ration aren’t good for the growing pullets (can damage their kidneys) until they start laying, so it’s better to feed the grower/conditioner and supplement the mature hens’ diet with free-choice oyster shell for a couple of weeks until the pullets start laying. 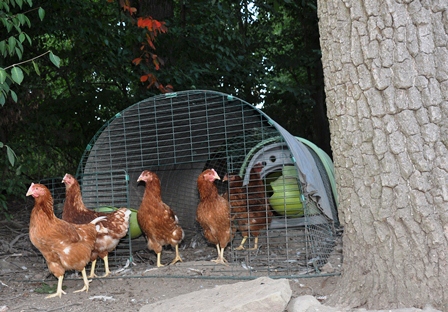 It’s a good idea to have several feeding and watering stations available so that the younger birds have access even though they’re lowest in the pecking order. We’ve found that having two in the main coop and maintaining the feed and water in the portable coop provides enough access for everyone. It’s also best to have plenty of space available with lots of things for the pullets to run behind or under so that they can escape from the adult hens if necessary.

The pullets always seem excited about the larger pasture, but stay together loosely in their own small flock(s). They generally do fine foraging and getting along with the adult birds. It’s a good idea to watch carefully as the groups mingle; occasionally one of the mature hens can become overly aggressive. In that case, it’s best to isolate just the aggressive hen for a few days. When she’s returned to the flock, she’ll be worried about returning to her place in the “pecking” order rather than picking on the pullets.

Using the method described above, we’ve not had any pecking injuries. However, if pecking does occur and blood is drawn, it’s best to treat with something like Blu-Kote immediately. It’s a blue antiseptic spray that masks any red color so the chickens don’t continue to peck at any injuries (they like to peck at red). If there still is serious pecking and scuffling going on throughout the flock after going through the process described above, it’s probably best to start over.

In the past, I didn’t look forward to integrating pullets, but this process has worked so well that it’s not a concern anymore. And, just as the older birds are slowing down on egg-laying in fall, the new egg-layers should be getting started!

The contents of this site are the property of Better Hens and Gardens. All content contained herein is copyrighted. We love it when you share, but if you do, please link back to the original post. Material included here is not intended to be, nor does it constitute, the giving of medical advice. This blogs content is for informational purposes only and Better Hens and Gardens or others associated with this site shall not be held liable for any damages incurred through the use of information provided in this blog. Better Hens and Gardens accepts products for review and other forms of paid advertising; however, although compensation received may influence the content or topics covered in this blog, it will never influence our opinion of any product. The views and opinions expressed in this blog are purely those of Better Hens and Gardens. Any product claim or other representation about a product or service should be verified by the manufacturer. Better Hens and Gardens is a participant in the Amazon Services LLC Associates Program, an affiliate advertising program designed to provide a means for us to earn fees by linking to Amazon.com and affiliated sites.
PRIVACY POLICY
1.3K shares