After installing a new queen, it’s important to do a honeybee hive inspection to ensure she’s been released into the hive and that the other honeybees have accepted her. Only then will you know if your hive is off to a good start and it will survive.

Step 1 – Get the Smoker Going & Put On Protective Gear

Before inspecting the hive(s), the first thing to do is get the hive smoker going. It’s really important to make sure the smoker is working well – you wouldn’t want the fire going out mid-inspection.

Then make sure to put on all the proper protective gear.

Make Sure Your Smoker Is Going Well

Carefully remove the top cover and top feeder to start the hive inspection.

Open up the hive, making sure that the smoker is in action (in the bottom left corner of the photo). 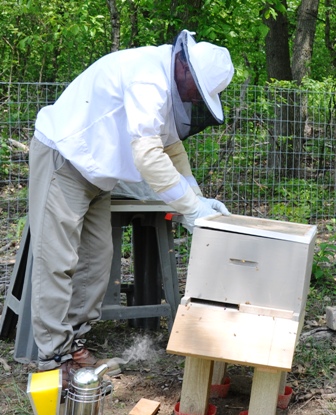 Opening Up the Beehive

Use the smoker to calm the bees before going in, and remove the queen’s box.

Here the queen’s box is being removed, to determine whether she’s been released into the hive yet.

Confirm the queen’s box is empty and that her workers successfully ate their way through the “candy” plug at the end of the box releasing her into the hive! At this step, it’s possible that the Queen hasn’t been released yet. In that case, put everything back together and wait a couple more days before inspecting again.

The inspection shown here was only a few days after installing the queen so there were no eggs yet. But, the bees have built some burr comb (the white-looking stuff beneath the bees) on one frame, which needed to be removed.

Burr Comb Found On The Frame

Preparing to remove the burr comb.

Here’s what the burr comb looks like after being removed from the frames. 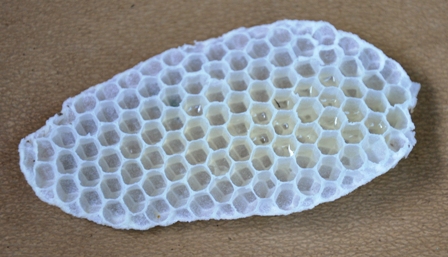 After finishing the inspection of the frames and bees, the frames go back in.

Then the top feeder goes on.

And, the first inspection is successfully completed! Everything looking good, the bees are busy bringing back supplies, so there’s a good chance the queen has survived and we’ll see eggs at the next inspection.

The contents of this site are the property of Better Hens and Gardens. All content contained herein is copyrighted. We love it when you share, but if you do, please link back to the original post. Material included here is not intended to be, nor does it constitute, the giving of medical advice. This blogs content is for informational purposes only and Better Hens and Gardens or others associated with this site shall not be held liable for any damages incurred through the use of information provided in this blog. Better Hens and Gardens accepts products for review and other forms of paid advertising; however, although compensation received may influence the content or topics covered in this blog, it will never influence our opinion of any product. The views and opinions expressed in this blog are purely those of Better Hens and Gardens. Any product claim or other representation about a product or service should be verified by the manufacturer. Better Hens and Gardens is a participant in the Amazon Services LLC Associates Program, an affiliate advertising program designed to provide a means for us to earn fees by linking to Amazon.com and affiliated sites.
PRIVACY POLICY
590 shares